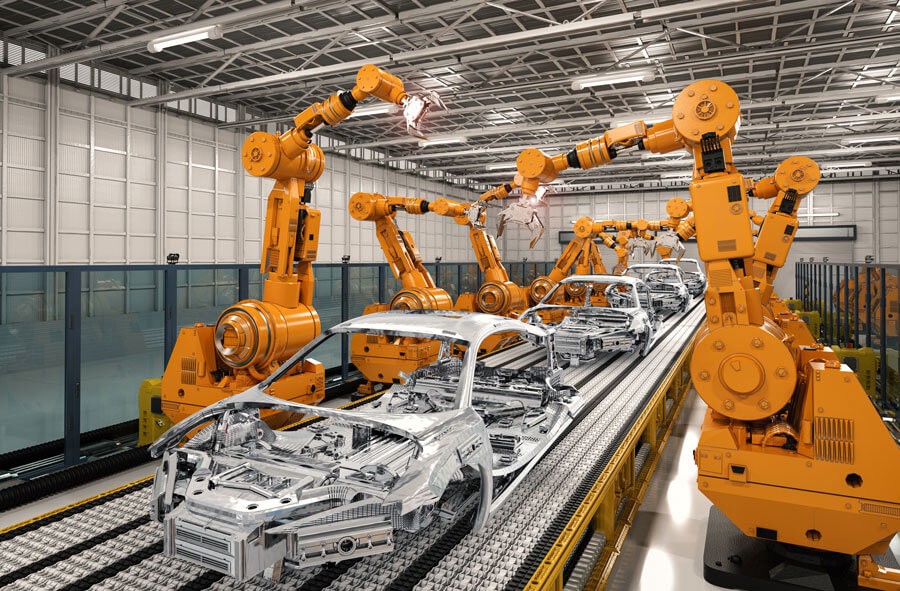 Access to advancements in technological innovations in the automotive industry has led to increased safety, cost efficiency and quality in production all thanks to automotive robots.

Areas of Applications for Automotive Robots

Car manufacturing involves several assembling processes which makes robot use crucial for increased efficiency. Some of these functions include the following;

Through the use of robotic arms, auto manufacturers are able to put together small parts such as motors and screws at a higher and more accurate pace compared to humans. In addition, the robot arms also help in wheel mounting and installation of windshields.

Among the advantages of using robots in any industry is their ability to take over task that were otherwise a health risk to people. Paint fumes are highly toxic to humans and have been known to cause a diverse number of respiratory complications when inhaled.

However, through robotic painting this risk is reduced. Additionally, automotive robots do a uniform and flawless painting job within a very short time. Automating such jobs also means that the automakers remain ahead of the labor shortages as the dynamics change and the market has less skilled painters to handle the precision required with vehicle painting. Apart from painting, programmed robotic arms handle related tasks such as applying adhesives and sealants.

Automating machine tending functions with robots has made feeding parts to and from machines faster and safer. The automotive robots handle tasks such as locating and loading raw materials as well as removing the completed parts.

In addition, automotive robotics are applied in production functions such as cleaning, sorting and inspection of the machines to ensure continuous tending.

Similar to tending related tasks, material removal is highly repetitive and an ergonomic risk when done by people. Automotive robots have taken over this function and are used to handle trimming and cutting tasks within the assembly line. Apart from the increased ergonomic safety, the robots have helped improve precision and accuracy in the process leading to production of better and more uniform parts.

With multiple parts needed to create a car, welding forms a crucial part in automaking. The high temperatures needed for welding are another health risk for workers which is why automotive robots are important in the factory.

Apart from that, robotic welding ensures quality in production is maintained and that the vehicles have similar finishes for each model. The small cobots used in auto factories are able to place the welding torch at the same exact position throughout the cycles with precision.

Case studies of automakers using automotive robots have reported that automation of welding tasks has improved ergonomic conditions for workers and helped improve cost saving. In addition, the companies have reported improved operation results with reduced car failures within the first year of automated welding.

Robotic or machine vision has been highly optimized by automakers and may be one of the main reasons why automotive robots are becoming a staple in auto factories. Robotic vision is very important in the quality assurance process in production. While there are blind robots, modern collaborative robots are equipped with vision abilities which enable them to perform inspection related tasks with high accuracy.

Given the risk associated to faulty vehicles on consumers, the automated vision through the use of smart cameras means that vision-guided robots are able to check and ensure each car part is well fixed and functioning. This is one function of the automotive robot that is expected to keep changing as more uses are found for it.

The rising popularity of electric vehicles has led to an increase in the use of automotive robots as auto manufacturers look to meet this demand and produce highly efficient cars. A deeper look into the automotive industry indicates that more money will be invested in robotics for those who are yet to invest while other manufacturers will focus on phasing out the older industrial robots with cobots.

While other industries increased their automation through collaborative robots, the automotive industry tops the list. Auto manufacturers have managed to automate tasks such as welding and spray painting which hold a high risk for injury when done by humans. Other delicate tasks which require the precision offered by automotive robots are material removal and machine care.

With more tasks being automated and as the industry players recognize the improved efficiency offered by collaborative robots, the demand for automotive robotics is expected to keep growing.

COVID-19 may have slowed down many industries including that of the automotive, however, deals related to automating processes within manufacturing plants has only began to pick up. In actual sense, the limitation of in-person labor in a pandemic, has only shown auto manufacturers the urgent need for introducing automotive robots to handle labor shortages which could otherwise lead to closure.

Automotive robots represent a solution that every automaker should consider integrating in their production process not only for the competitive edge but also for the diverse functionalities they offer. While a decade ago increased automation felt like a threat to human labor, current trends show that robots are more accessible than they were before.

The use of cobots is especially important for high-risk jobs such as painting and welding as well as in easing tedious and repetitive jobs that only make production stressful. Additionally, the decrease in skilled labor and limited factory spaces are problems that automakers have been able to solve by integrating robotics in their factories, an advantage that has helped many businesses remain open.

While we could list a huge number of automation benefits for the automotive industry, the bottom-line remains that investing in automotive robot should be prioritized by all automakers.

10 Ideas to Purchase a Used Vehicle

How you can Prolong Your Vehicle Engine’s Existence

Ways to get Auto Parts at Great Deals

Smart Select The Next Vehicle